In 1951, Orange Township Trustees E.P. Brintlinger, J. David English, Clifford S. Gooding, and Treasurer John Schimmel saw a need for fire protection. Each of the trustees then recruited young men to be volunteer firemen. On October 2, 1951, volunteers met in the Township House and held regular meetings thereafter. They made contributions and received donations from interested people and companies. 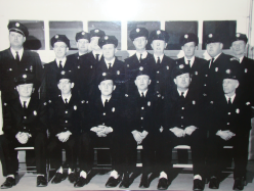 An old oil tank truck was purchased for $152 and was made into a water truck. The men also fixed up a Willy's Jeep pick-up truck to be used for fighting grass fires. They fitted it with a water tank, a pump, and painted it red. The trucks were kept in John Schimmel's barn until the firehouse was built.

The first firehouse was built by Frankenburg. The building provided a place for the fire truck and the grass truck, and meetings were held in the back. Later, many of the volunteer firemen helped build an addition on the north side of the building that had restrooms, a kitchen, and a meeting room. The building served Orange Township well until 1986 when a new firehouse on the corner of Orange Road and Old State Road was built. The larger building included a meeting room (for trustee meetings), kitchen, day room, restrooms, offices, radio room, and storage room beside three large truck bays. A second fire station located on the west side of U.S. 23 in the North Orange development was added in 2004, and is considered one of the most up-to-date facilities in central Ohio. The station was built to allow for future growth, and offers numerous training opportunities on-site.

Sherman Ball Sr. was the first Orange Township Fire Chief. He was chief from 1952 to 1960 with Bill Percy as Deputy Chief from 1952 to 1984. Virgil Newell was the chief from 1960 to 1987. Bill Noble was chief from 1988 to 2000, and saw the department through the changing of volunteer to a full time 24/7 service. Tom Stewart served as Fire Chief from 2000 through February 2014. Under Chief Stewart, a 24/7 advanced cardiac life support, and basic trauma life support emergency medical response and transport service was implemented to meet the EMS demands of a rapidly growing township. Chief Stewart was also instrumental in remodeling the station on the corner of Orange Road and Old State Road, and the planning and building of the new station on U.S. 23. Matt Noble served under Chief Stewart as Assistant Fire Chief for more than nine years. Upon Stewart's retirement, Matt Noble was appointed Fire Chief.

In 2021, Nathan McNeil was appointed Fire Chief and is working hard on building the force and acquiring new equipment.